I’ve been meaning to write something about Dia de los Muertos here for weeks now. The celebrations in Mexico are something truly extraordinary. November 2nd is an official public holiday, and the 1st seems to be an unofficial one. Halloween is celebrated too, but with quite a different focus to how it is in the UK. I had thought that Mexico City took it seriously – for roughly two weeks building up to the beginning of November the city had been strewn with omnipresent cempasuchil flowers, painted skulls and skeletons popped up everywhere, and there were two separate city-wide parades – but a birthday trip out to Morelia in Michoacan showed me that DF was pretty restrained in its love of Dia de los Muertos, and it was only in Michoacan that they knew how to do it right.

HOWEVER, I feel that to really do it justice will take a little longer than I have right now, as there are a whole host of things I want to explore, about the interesting overlap between what are essentially pagan beliefs and intense Catholicism that is a part of all Mexican life but brought vividly to the front in the Day of the Dead festivities, about the amazingly joyful and tongue-in-cheek approach that Mexicans have to death and the dead, again something that translates into their approach to life more generally, and many other things about this excellent festival (what’s not to love about a country that treats my birthday as a national holiday?!). So instead, I’m going to share a little slice of weirdness that we encountered on the way home from my birthday trip to Morelia – Tlapujahua, the town of always Christmas.

An old mining town, nestled in the hills in Michoacan just outside the Estado Mexico, Tlapujahua is one of Mexico’s ‘Pueblos Magicos’. This moniker would be richly deserved whatever the other factors, as it is a beautiful little town, balancing precariously on a hilltop, its steep cobbled streets and winding lanes culminating in a fabulous rose-pink church, overlooking the fabled monarch butterfly forests just over the crest of the next hill. Indeed, its Visit Mexico listing doesn’t even mention anything beyond pine forests, architecture and butterflies, and you might arrive expecting nothing more than another picturesque Mexican pueblo.

But, in Tlapujahua, it is always Christmas.

A major landslide buried about a third of the town in 1937, and closed the Dos Estrella gold mine, effectively ending mining as a going concern in the area. One resident, Joaquin Munoz Orta, who left the town looking for work ended up in Chicago, working at an artificial Christmas tree factory. Coming back to Mexico in the 60s to a still-jobless town, he started making trees with his family to sell in La Merced in Mexico City, along with blown glass ornaments. These ornaments ended up outselling the trees, so they moved back to Tlapujahua, and set up a Christmas bauble factory (as you do). Over the next few decades, things got a bit out of hand (Mexicans love Christmas), and the Adornos Navidenos SA de CV is now the largest producer of Christmas ornaments in Latin America, and in the top five largest globally – still operating out of a town of around 4,000 people. They produce 38 million baubles a year, employ about a quarter of the town’s population, and 70% of the town’s economy is now based on Christmas decorations, as following Munoz Orta’s success everyone else in the town decided to do the same thing, meaning that almost every shop, stall and business in the town is in some way related to Christmas. 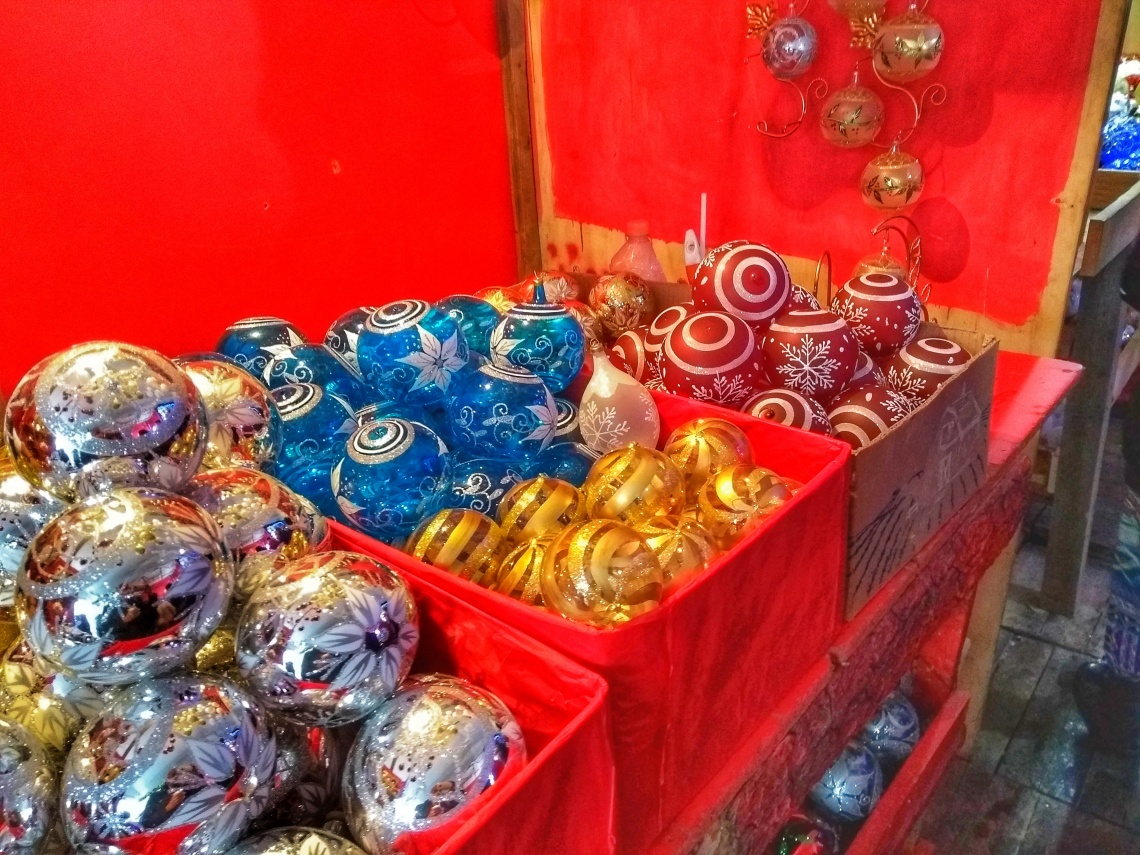 This creates a bizarre atmosphere. The whole town is, year-round, one giant Christmas Market. A huge Christmas tree dominates the first square you come to as you climb the hill, acting as a shop window for the town, and every corner, street and alley twinkles with baubles, tinsel and exquisitely ornate Christmas lights. 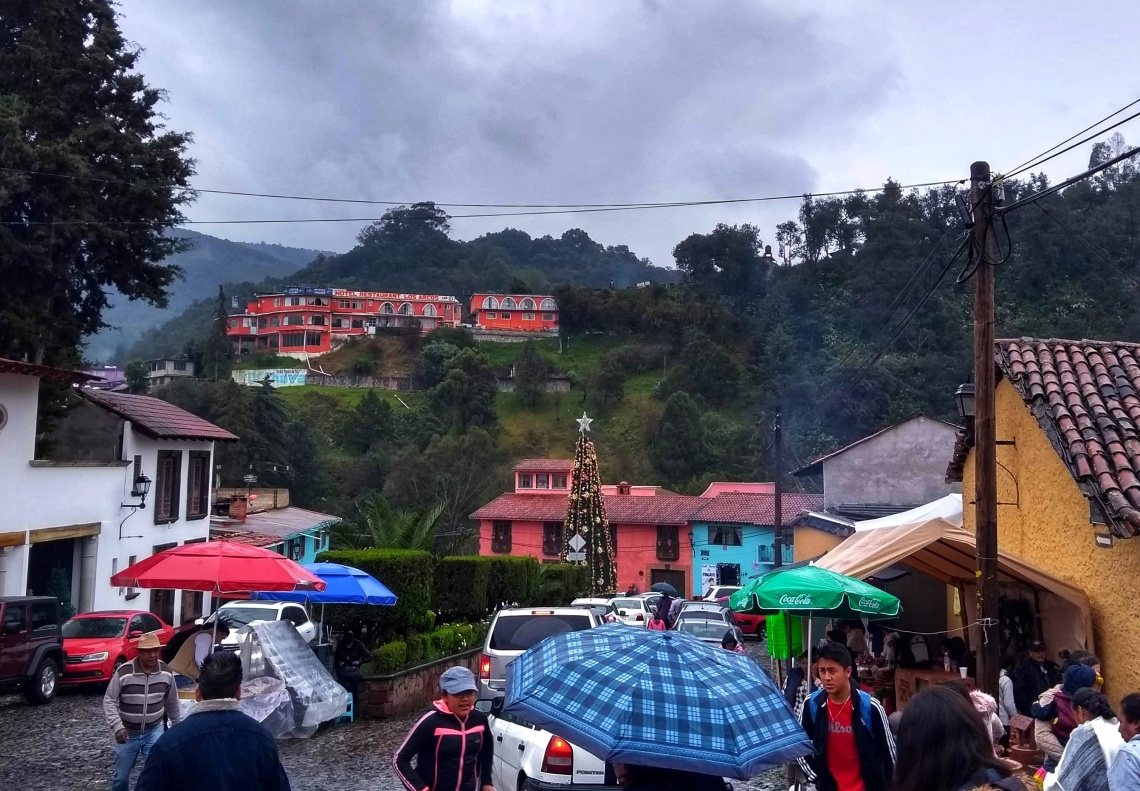 I’m not, to put it mildly, a tremendous fan of a gaudy Christmas, and especially not a fan of any Christmas at all before December, but while you might expect this town to be my kryptonite I actually found it rather charming. The spheres themselves are really spectacular, genuine works of art, and such incredible variety, and the normalisation of the work helps avoid the tackiness inherent in Christmas Villages that pop up in the festive season elsewhere.

We didn’t stay long, as we were only about halfway through an epic, traffic-ridden eight hour schlep back home, so grabbed a 12-pack of baubles, a quick snack of quesadillas and esquites, and hit the road again, but I was oddly taken with this weird little place, and would like to go back for a proper exploration. Maybe Mexico is softening my natural scrooge-like tendencies along with my previous aversion to dogs, or maybe I was just tired and impressionable after a long time on the motorway. I guess we’ll see in a few weeks time when Christmas comes to the Robles Obregon household in earnest…