My oldest friend came to visit my newly adopted country over Christmas and the New Year. We met in Merida, in Yucatan, and spent a delightful couple of weeks exploring a corner of the country hitherto undiscovered by me, soaking up sunshine on the Riviera Maya, and getting to grips with arguably the best of Mexican cuisine. Yucatecan food is genuinely outstanding, with the meaty, slow-cooked joy of cochinita pibil, the fresh, invigorating sopa de lima and chaya, and the weird but kind of wonderful Dutch cheesy delights of queso relleno, huevos motulenos, and marquesitas. 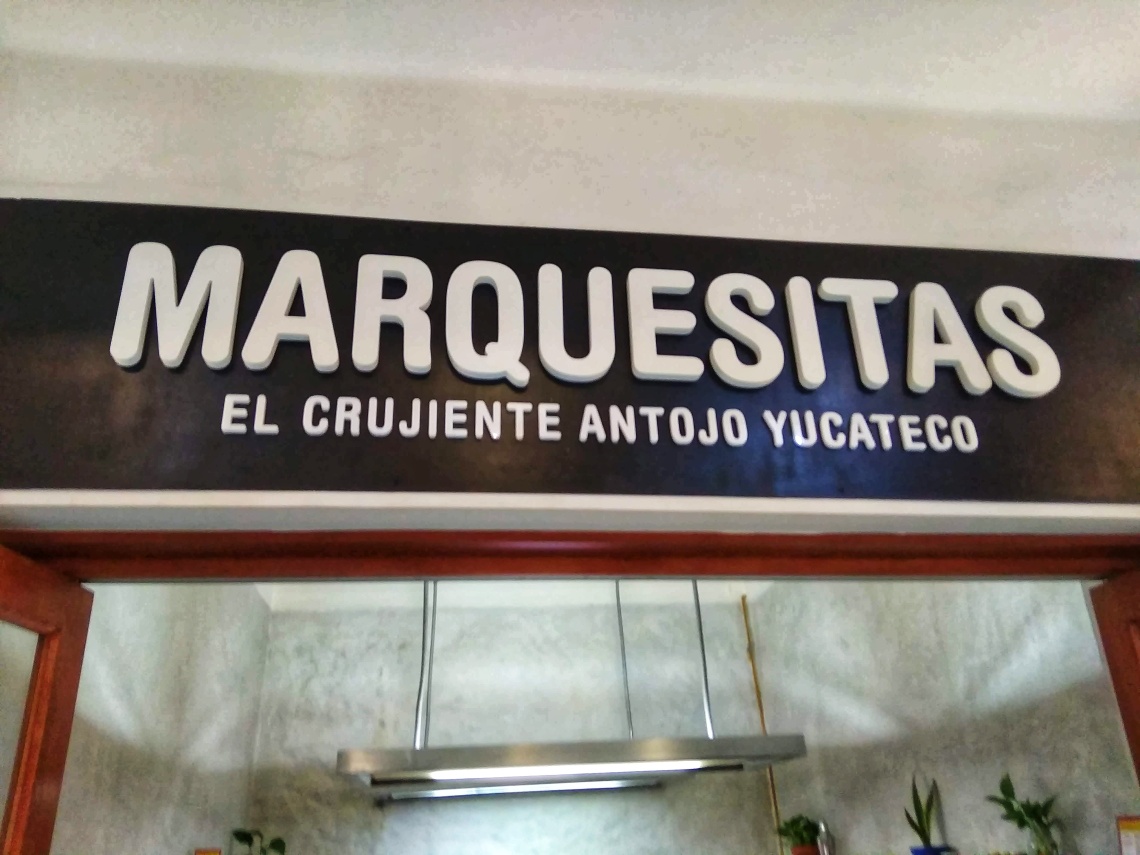 Despite this wealth of gastronomic delights, the thing we ended up talking about most wasn’t the UNESCO-approved intangible cultural heritage of Yucatan, but about corn. Or rather, about tortillas, and how insanely ubiquitous they are in almost every aspect of Mexican cooking. Just as I did when I first arrived in Mexico, Claudia found the fact that on the face of it Mexican cooking seems to revolve rather relentlessly around small tweaks to a very simple formula.

After about the seventh time of beginning an explanation of what something on the menu was with ‘well, it’s a corn tortilla, with chicken, cheese, avocado….’ I tried to explain how what is essentially the same dish repeated umpteen times with small but vital variations manages to make up a genuinely varied and delightful cuisine.

‘Vitamin T’, as Myriam’s family delightfully described it to me as, is at the heart of so many of the quintessential Mexican foods. Mexicans are, quite literally, addicted to maize, predominantly in the form of the tortilla. And yet, where in Europe, and as far as I can tell the US, the tortilla is a pretty standard, almost boring vehicle for wraps, burritos and at a pinch fried up as a tortilla chip, in Mexico it is so much more. Tacos, tostadas, tlacoyos, tlayudas, sopes, gorditas, quesadillas, enchiladas, totopos…almost everything involved in the rich, delicious Mexican street food scene revolves around the humble corn tortilla.

One of the first times I began to feel like learning Spanish wasn’t completely impossible and that at some point I might even be able to communicate like an actual human being was watching Mexican stand-up. The comedian spent a good five minutes describing her favourite foods, drooling over something in an imagined conversation before explaining what it was…repeating bashfully ‘tortilla, pollo, crema, queso, frijoles, aguacate…pero differente!’ Simple. I laughed. Huzzah. 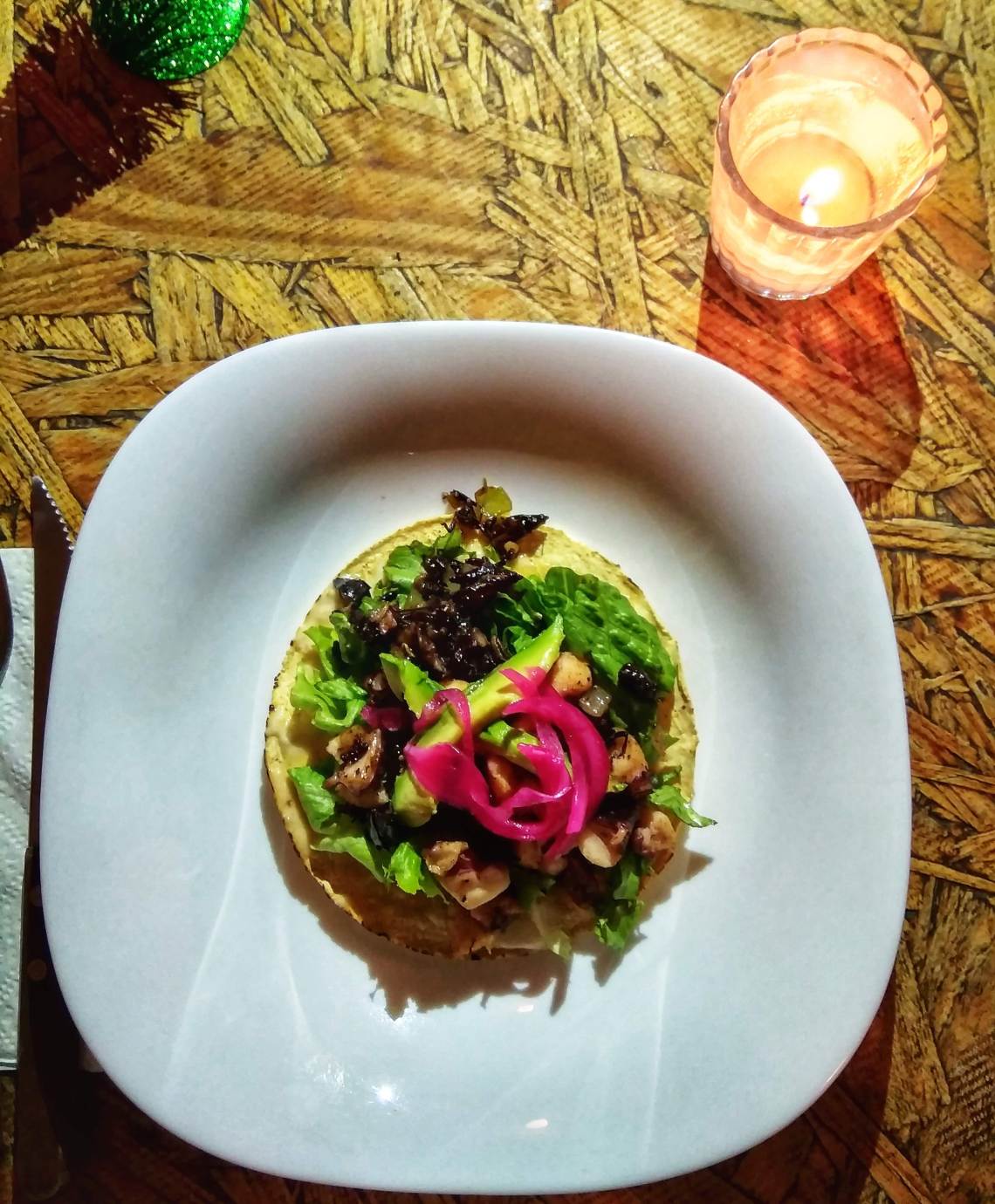 In my first couple of weeks here I tended to mock Myriam gently by asking her to explain to me how enchiladas, flautas, chilaquiles, or enfrijoladas really differed from each other, really. Now, five months in, I found myself doing the exact opposite, explaining to an incredulous Claudia that ‘yes, essentially panuchos and sopes are the same, but sopes are thicker, you see, and panuchos just that little bit more crispy and IT MAKES A DIFFERENCE’.

So a quick A-Z (or T-T?) of corn-based delights, because Claudi asked me to do it. And because it is genuinely interesting how a flat maize pancake can drive a whole country’s gastronomy.

Tortillas – corn or wheat (it makes a big difference). Corn tortillas are smaller, denser and with a richer, cornier taste. Wheat tortillas are what we think of in Europe as a tortilla, although very much the poor relation here.

Tacos – oh god, where to start. This is already a much harder job than I’d initially planned. Tacos have an almost infinite variation depending on tortilla type, filling and salsa, with pretty much the only thing that isn’t a taco is the ‘taco shell’ that is so beloved of tex-mex. The basic taco – small corn tortilla, meat and salsa – has so many variations and fillings that it would be impossible to describe then all.

Trying to describe the difference between cochinita pibil (slow cooked pork with achiote), carnitas (slow cooked fatty pork) and suadero (slow cooked pork in lard) is…troublesome, to say the least. Guisado tacos involve a kind of stewed meat…but then so do birria, and barbacoa, and yet there is almost no similarity beyond the vehicle, the tortilla itself.

Tacos al pastor have a fascinating history, brought over from Lebanon by the surprisingly large and influential Lebanese immigrant community (there’s a Maronite church in the centre of Mexico City that I want to explore further at a later date). Essentially they are a doner kebab, but pork, roasted in Mexican spices, and topped off with pineapple. Tacos arabes adds another level of middle eastern influence, taking in all the above, but in a pitta bread (the tacos doneraky from El Greco, although delicious, I’m discounting because calling an actual shawarma kebab a taco just because we are in Mexico doesn’t make it one, guys…).

Fish tacos, chicken tinga tacos, corn fungus tacos, cactus tacos…broadly speaking if you can put it on a tortilla, cover it in salsa and sprinkle coriander and onion on the top, there’ll be a specific form of taco devoted to it.

The best guisado tacos I’ve had are a stand called El Gato Volador on the corner of Alvaro Obregon and Insurgentes.

The best pastor tacos I’ve had are from Taco Naco (I maybe just like the name) on Insurgentes opposite Aguascalientes.

The best fish tacos are at El Pescadito, either in Roma or Condesa.

The best carnitas full stop are in Carnitas Don Pepe in Morelia. The ones at Rincon Tarasco on Patriotismo in Mexico City are not bad either, though.

In my opinion the best cochinita pibil should be eaten as a panucho, and shockingly wasn’t in Yucatan but in Mexico City, at Fonda 99.99 just off Felix Cuevas on Moras. This also happens to be probably my favourite restaurant in the city, and featured in the Guardian, so that’s a thing.

I’m also a big fan of my local taco stand opposite Tacos El Paisa in Escandon, on Jose Marti and Francisco Murguia. Myriam says she can’t eat them because they are too lardy, but the tacos cachete, the pigs’ cheeks, there are soft and delicious, and it’s hard to pass them by on the way home.

Tostadas – fried (or baked) tortillas, thin and delicate, topped with anything you like. Essentially a booby trap for the unwary, as one bite destroys the structural integrity and deposits most of the delicious toppings in your lap.

Tlayudas – a huge, fried, crispy tortilla, like a tostada on steroids. Usually spread with salsa, spices and toppings like the thinnest, crispiest pizza imaginable.

Tlacoyos/huaraches – someone earnestly tried to persuade me that these were genuinely different things, but being a slightly larger version of a tlacoyo doesn’t make a huarache special in my book. Essentially fatter, oval corn tortillas stuffed with meat, beans or cheese and fried. Disturbingly good.

Sopes/panuchos – this is where I began to take a long, hard look at myself, my choices, and what I was standing up for. I genuinely went to bat for panuchos as ‘the best form of tortilla’. A thicker tortilla just slightly fried so still soft, but perfect for cochinita pibil, which happens to be the ultimate topping in my opinion. I then tried to discuss sopes, which I like, but consider inferior…I don’t know what’s happening to me. Sopes are thicker, slightly fried tortillas that are still soft, BUT TOPPED WITH FRIJOLES so completely different.

I have no real idea how this ended up here. In the beginning I just wanted to write something simple, a little description of how amazing Mexican food is, and how remarkably important the little differences are in creating a vibrant, varied food culture. What I seem to have ended up with is a rambling, confused rant about why huaraches are up themselves, some self-reflection about whether I’ve been driven insane by small corn pancakes, and a list of my favourite taco restaurants are, as if anyone cares. As I’m writing this I considered just ditching the whole lot and starting again, but I decided against it. Sometimes the nonsense is fun, and if anyone does end up in Mexico City ever this might be of use.