We’d been driving in a straight line down a narrow road for almost an hour, and my vision was beginning to tunnel to a sharp point ahead. At one point a possible puma to our right had provided distraction for some (I missed it), but otherwise it had been nearly 60 minutes of grey tarmac passing beneath us, of green jungle on either side, and a receding dark horizon narrowing to a point. 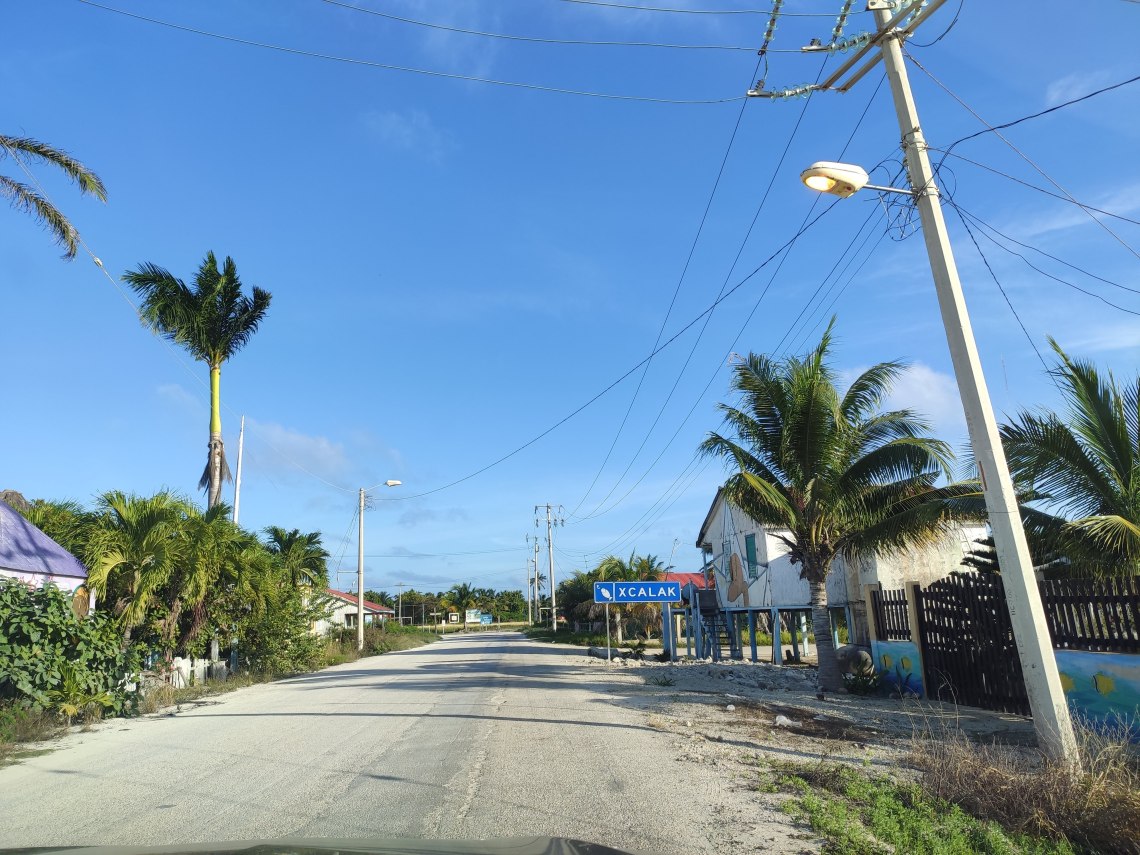 Our destination, Xcalak, is far from almost everything. A tiny town of around 200 people, boosted by North American sports fishermen and the odd, slightly confused tourist, it sits on a sliver of land running parallel down the coast south of the lush, green Sian Ka’an Biosphere Reserve, right at the edge of Mexico. A brisk run south brings you to a canal, the other side of which is Belize. My parents, in their continued efforts to discover new birds everywhere they go, accidentally sailed into, then out of, then into, then out of Belize, twisting and turning through narrow waterways between the two countries. The excitement of inadvertently becoming illegal immigrants was nothing compared with gazing upwards at what I managed to identify as ‘some white birds, possibly gulls’ that were nevertheless extremely exciting. 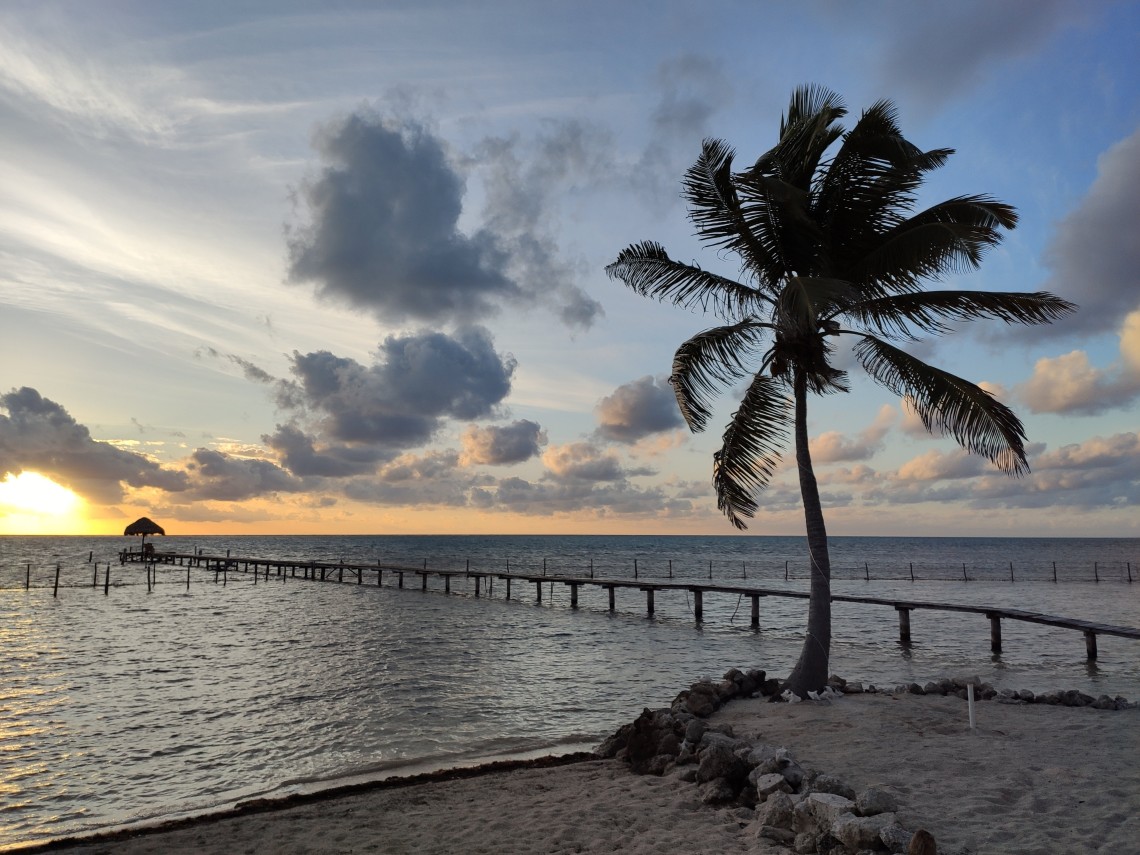 This remote spot, hidden away from the rest of the Riviera Maya, could well be the last truly unspoiled destination on the Yucatan Peninsula. Mahahual, the nearest town, has a cruise port and is a lively tourist destination, but the long, straight, endless road down the peninsula to Xcalak deters southerly exploration. Driving up the main Quintana Roo highway from Chetumal or Bacalar, as we did, very few people take the Mahahual turn, drawn further north to Sian Ka’an, Tulum, Playa del Carmen and Cancun. Those that do find Mahahual sufficient. Yet Xcalak, largely because of this lack of interest, is a proper little paradise. Granted it doesn’t boast the perfect beaches or turquoise waters of Tulum and Playa, or the decadent resorts of Cancun, but for a period of true tranquility it is hard to beat.

Anyone who knows me well knows that balancing sports are not my forte. I’ve never skied, regard an ice-skating session where I am upright for the majority of the time as a success, and spent my only water-skiing attempt submerged up to my neck being dragged around by a boat, my skis flapping uselessly behind. With this in mind (and considering that I still view people actually surfing as a moon landing style hoax) I did not have high hopes for paddleboarding. But the kind people of Casa Paraiso provided both paddles and boards to their guests, and the sea was delightfully becalmed so it seemed ridiculous not to at least try.

Turns out, paddleboarding is my thing. I’m basically a professional. But gliding regally around this shallow millpond of a sea for fifteen minutes with Myriam sitting at the front of the board a la Queen of Sheba was just the hors d’oeuvre. A small wave lapped at the board, I righted myself after a brief stumble, and something winged and dark exploded out of the sand beneath us and zoomed out to sea. The briefest of glimpses of my first manta ray was pretty damn exciting, and soon enough Mimi, my mum and I were swimming out to sea clutching snorkels to see what else we could find. Sand, seagrass and the occasional silver tiddler passed beneath us, but at the point of turning back two pillars of coral emerged from the flat expanse, and the sea lit up with vivid electric blues and yellows, gently waving anemones, and vast shoals of tropical fish. As I turned back to reassure Mum that we’d finally found something worth seeing, another dark shape emerged behind her, this time moving slowly, calmly, as if it owned the place. For me, seeing rays is a wonderful combination of amazement (because they are weird and wonderful as hell) and fear (because I’m not a marine biologist and who can tell the difference between a manta ray, a leopard ray and a stingray anyway?). Over the course of our time in Xcalak we racked up around fifteen rays, most of whom were happy to glide gently beneath us, a few small strokes away from touching distance. One of the best underwater experiences of my life.

So Xcalak. Some of the best snorkelling I’ve ever experienced. Wonderful flights of birds, if that’s your thing. Calm, peace and tranquility. Warm, calm seas. Pumas, apparently, although I’m still not certain that Mum, Tony and Myriam weren’t just taking the piss (I’m not bitter that I’m the only one who didn’t see it, I’m just retaining a healthy scepticism). The perfect place to ring in the New Year? Turns out…yeah, kind of! Despite being in the middle of nowhere, almost at the end of the world, Xcalak has a pretty fancy, fine dining restaurant. For a frankly ludicrously small amount of money, we dined as well as we did all holiday in the charmingly named ‘Leaky Palapa’, surrounded by a whole bunch of other gourmands who seemingly popped up from nowhere. Myriam and I then wobbled our way tipsily on the Casa Paraiso’s bikes between the XTC Dive Centre and Costa de Cocos, the two most (only) jumpingest joints in town. Midnight was seen in, as is traditional, singing along to a low-fi acoustic version of the Proclaimers ‘500 Miles’ played by a Canadian ex-software engineer turned musician/photographer. The home brew at Costa de Cocos was fantastic, and I’m still sad I didn’t try their home-distilled ‘whisky’…but at least I still have my eyesight. 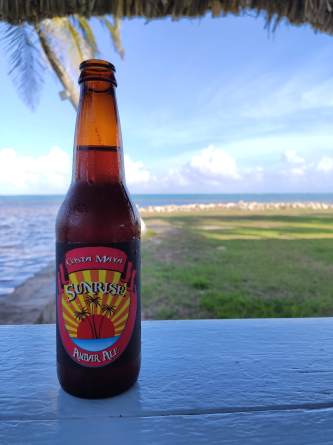 Xcalak isn’t on the way to anywhere. It doesn’t have the unrivalled natural beauty of a pre-boom Tulum, or the piratical charm of Bacalar. But it is a gorgeous little slice of paradise, and anyone looking to go beyond mobile phone reception to a place where what you eat has to have come out of the sea or off the trees should fill your car with petrol and drive south, in a straight line, for a while.