I started writing this blog in a different time. At a time when Brexit was pretty much the biggest thing on the radar of me and my immediate circle, and the new Tory government with a mandate to do all sorts of things that I am deeply uncomfortable with was the most concerning.

So my initial thoughts had centred around nationalism, and how it seemed to be taking hold across the world, and back at home in the UK. The littlest of Little Englanders had taken a vice-like grip on the prevailing narrative about what it means to be British, and the backlash seemed to be a resurgence of Scottish nationalism, a resumption of soul-searching about the nature of Ireland, and even talk of Welsh independence. Welsh independence! You really know you’ve screwed the pooch when Wales decides it is better off untethered (or the pig, I guess *looks meaningfully at David Cameron’s suspiciously locked shepherd’s hut*…).

But this is all now something quaint, an old-fashioned concern about issues from a different time (although of course the repercussions remain just as serious, and nothing has changed when it comes to the fact that ultimately the most vulnerable people in society are going to suffer).

Of course, nationalism hasn’t gone away. It’s just that faced with a crisis of this magnitude, so many of the actions that nationalist governments would love to do in the normal course of things have become…acceptable, or even necessary. Closing borders, tracking citizens through technology, hacking phones…these measures, while draconian, are suddenly seen as positive, or at least unavoidable.

Which does rather balls up my little rant about the inherent stupidity and nonsense that underpins nationalism. Nationalism is something I’ve always found baffling. The briefest glance at history exposes it as a philosophy based on power structure, fear of ‘the other’, and lies about who we are, rather than anything good, useful or true. Where I’m from is great, of course. Defending London as the greatest city in the world is a hill I would die on. England is an endlessly fascinating, bizarre and contradictory country. Britain as a whole is great (not Great), with a fantastically mongrel history that has produced a patchwork culture that reverberates around the world. Partially, I’ll admit, because we kept conquering large portions of said world, subjugating the locals and forcing them to listen to the reverberations, but still. And despite my revulsion of nationalism as a political force, being abroad does make me nostalgic for weird things from home that I miss, and bizarrely delighted when I encounter ‘English’ things in unexpected places.

Which is essentially a really long-winded, overly complicated and unnecessary intro into a trip I took last year to Real del Monte, a small ex-mining town in the mountains around Mexico City, where they are renowned across Mexico for their Cornish pasties. 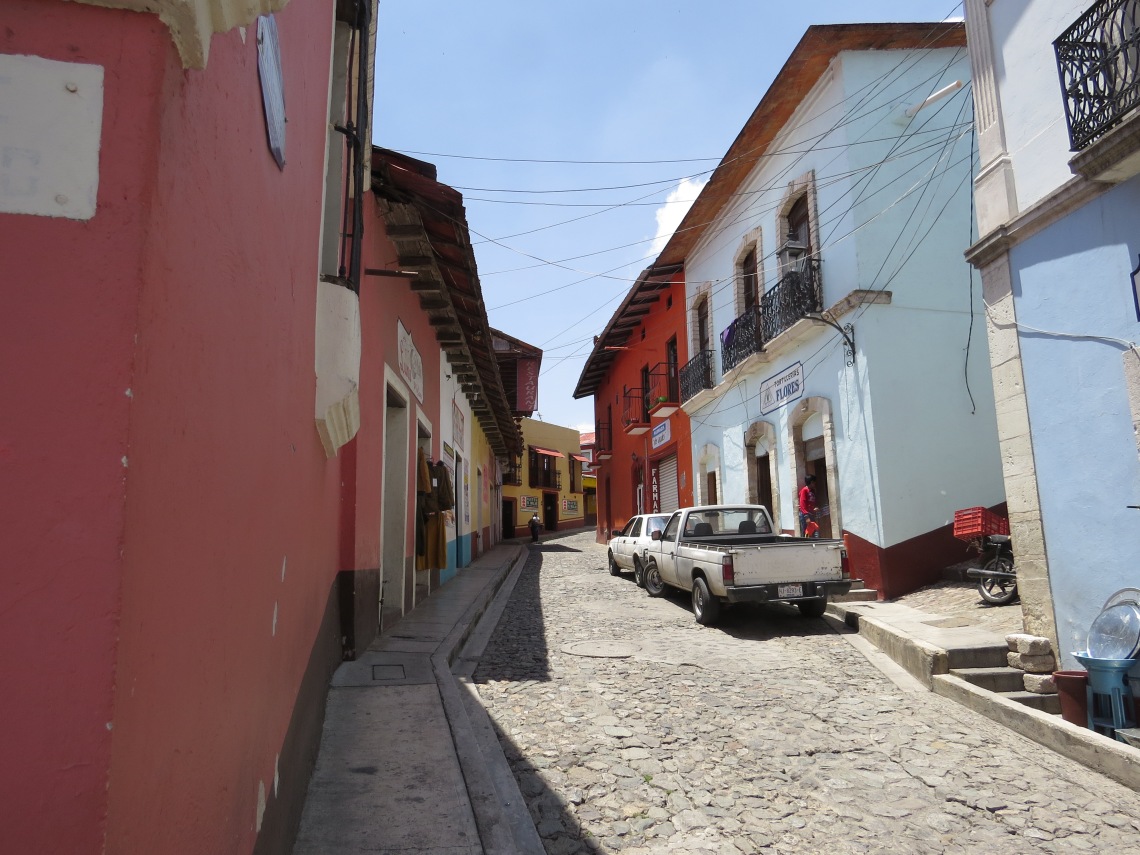 After a long, hot drive, dodging the Mexico City Marathon runners as we escaped the city and twisting and turning our way through a set of pretty rugged mountain roads, we ended up in Real del Monte. We piled out of the car at the bottom of this lovely little town, stacked up on top of itself in the manner that so many of these Mexican mountain towns in Hidalgo are, and began trudging up the cobbled streets. One of the first things that caught my eye was a small, tiled sign on the side of an otherwise unassuming building claiming that here marked the birthplace of football in Mexico, and calling it an English inheritance. Further exploration found the building to be a slightly tatty five-a-side football pitch, literally the home of Mexican football, but currently hosting a casual Sunday morning kickabout. I absolutely loved this.

Real del Monte is a pretty, charming town. The picturesque town centre has a sense of grandeur to it, and you can feel that this was, once, an incredibly prosperous place. It bursts with colour in places, in the way that so many of Mexico’s pueblos magicos do, with grand yellow churches standing out from cobbled streets painted in blues, greens and reds. But Real del Monte also has some starker whites and greys, conjuring up a very European ambiance in the Plaza Principal. 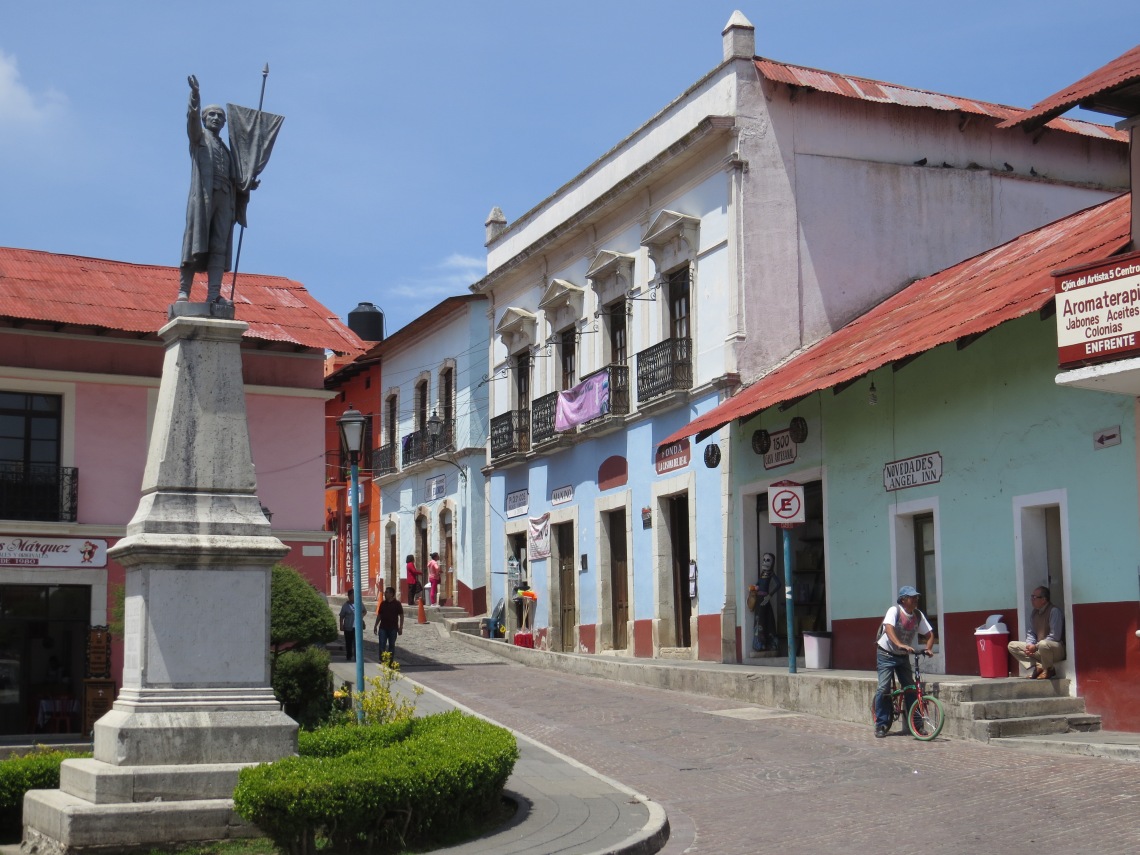 So far, so normal. But imagine my surprise when I stepped across the threshold of a small panaderia in search of a snack, and was confronted by rows and rows of the black and white standard of St Piran, the Cornish national flag. Behind the counter, more symbols of Cornish nationalism, and a blackboard offering a dizzying variety of pastes, from classic meat and veg through the more esoterically Mexican al pastor, all the way to raspberry and cream cheese.

Everywhere we turned in the town, shops were selling Cornish pasties. Some places really leaned into the Englishness of it all, with names like Pastes Cornish, Pastes London, and Big Ben Cantina, while some were far more Mexican, offering pasties filled with raja con crema, chicharron and the aforementioned al pastor.

This baffling takeover of a small, quite remote Mexican town by British culture can be explained, in part, by its history. Real del Monte’s past is defined by the metal in its hills. Roughly 1.2 billion ounces of silver, and 6.2 million ounces of gold are estimated to have come from the mines in the region, around 6% of the total silver mined across the entire planet. The Spanish started mining here immediately after the Conquest, and largely used indigenous Mexicans and African slaves, despite the various laws banning such practices. Amongst its various other claims to fame, Real del Monte saw what was probably the first real labor strike in North American history in 1766 in protest at the working conditions.

Cornish influence on the history of Real del Monte is pleasantly (and unusually for 19th century British adventures around the world) benign. Cornish miners essentially took over mining in the region at the beginning of the 19th century, with large quantities of Cornish immigrant workers coming to work the mines, and a Cornish company from Redruth owning the majority of the mines. They brought new technology to improve conditions, new equipment to stop so many people drowning in the mines, and began paying miners actual money. Real del Monte is even a little outpost of Methodism, set against the overwhelmingly Roman Catholic rest of the county. Francis Rule, a native of Camborne, was so successful here he became known as El Rey de la Plata, the Silver King, and built mines, the Panteon Ingles (English Cemetery) and civic buildings across the region. For around 25 years in the mid 1800s this really was a little slice of Cornwall, pasties, football and all.

Going back to the pasties. The enthusiasm with which the Mexicans of Real del Monte have embraced this niche British delicacy is indicative of their approach to culinary traditions across the country. Mexican food culture is overrun with examples of curious elements from immigrant cuisine being successfully and wholeheartedly amalgamated with local dishes to create a uniquely Mexican cooking tradition. From the tacos al pastor (Lebanon) of Mexico City to the queso relleno (The Netherlands) of Yucatan, traditional Mexican cooking is so often an intriguing and ingenious mixture of flavours, ingredients and methods, and it is entirely unsurprising that they have similarly embraced the Cornish pasty. I wouldn’t want to cause an international incident by comparing the relative merits of either tradition, but I would just say that a sweet pasty of raspberry and cream cheese is a pretty fine innovation, and well worth investigating.

Coming across a little parcel of British weirdness in the middle of Mexico was a delight. This country is endlessly surprising, and there always seems to be something brilliantly bizarre to discover just around the corner. It is also deeply reassuring to know that if the urge hits, a proper Cornish pasty is just a car ride away.