These three seemingly innocent words – the promise of safety, security, a delicious experience – turned out to be my baptism of fire into the world of eating like a local in Mexico City.

I foolishly, naively, trustingly took these words at face value. Salsas are everything when it comes to Mexican cooking, and although I love spice I have a healthy respect for Mexicans’ love of fire in their food. But I believed their words, and liberally spread the rich, red sauce over the steaming, deep-fried decadence I held in my hands.

Never trust a Mexican when they tell you something isn’t spicy.

Travel and food go hand in hand. For anyone with even a passing interest in eating well, exploring a new city offers amazing opportunities to discover new flavors, meals, and combinations that you won’t find anywhere else in the world. Exploring the cuisine of somewhere like Mexico City also gives you a chance to get a little more insight into how the city actually works, how people go about their daily lives, and offers a sneak peek into the culture, the personality of the place.

In Mexico City, probably more than anywhere else I’ve traveled, eating like a local is fundamental to getting a proper understanding of the city and its people. Nowhere else is the link between food and personality, and character even, quite so marked. And as an added bonus, eating like a local in Mexico City is absolutely, sensationally delicious.

Eating like a local in Mexico City is all about ‘Vitamin T’. The city is fuelled by a love for tacos, tortas, tamales, and tlayudas. While the city has some seriously high quality fine dining options, the real heart of Mexico City’s food culture is found on the streets. Places like Pujol and Quintonil might shine on lists of the best restaurants in the world, but ask any Chilango for a recommendation and, chances are, they’ll send you to their local taco stand.

The best meals I had while living in Mexico City began with an adventure – following vague directions through deserted streets, seeking out esoteric, absurdly local reference points, then looking for the queue of people beneath a dim, flickering street light…
So the key to eating like a local in Mexico City is bravery. Do not be fooled by appearances. Some of the dodgiest-looking places serve up the most incredible food you will find anywhere, even if they look like the headquarters of Food Poisoning Inc. Be guided by people, rather than atmosphere. If there’s a long line outside a fonda or taco cart, chances are it is worth giving it a go. This is not just because locals know the best spots (although they obviously do), but because when it comes to tacos, turnover is key. You want those fluffy little pockets of corn to be filled with meat straight off the grill, and for that you need the taquero to be shifting tacos as fast as they can sling them. 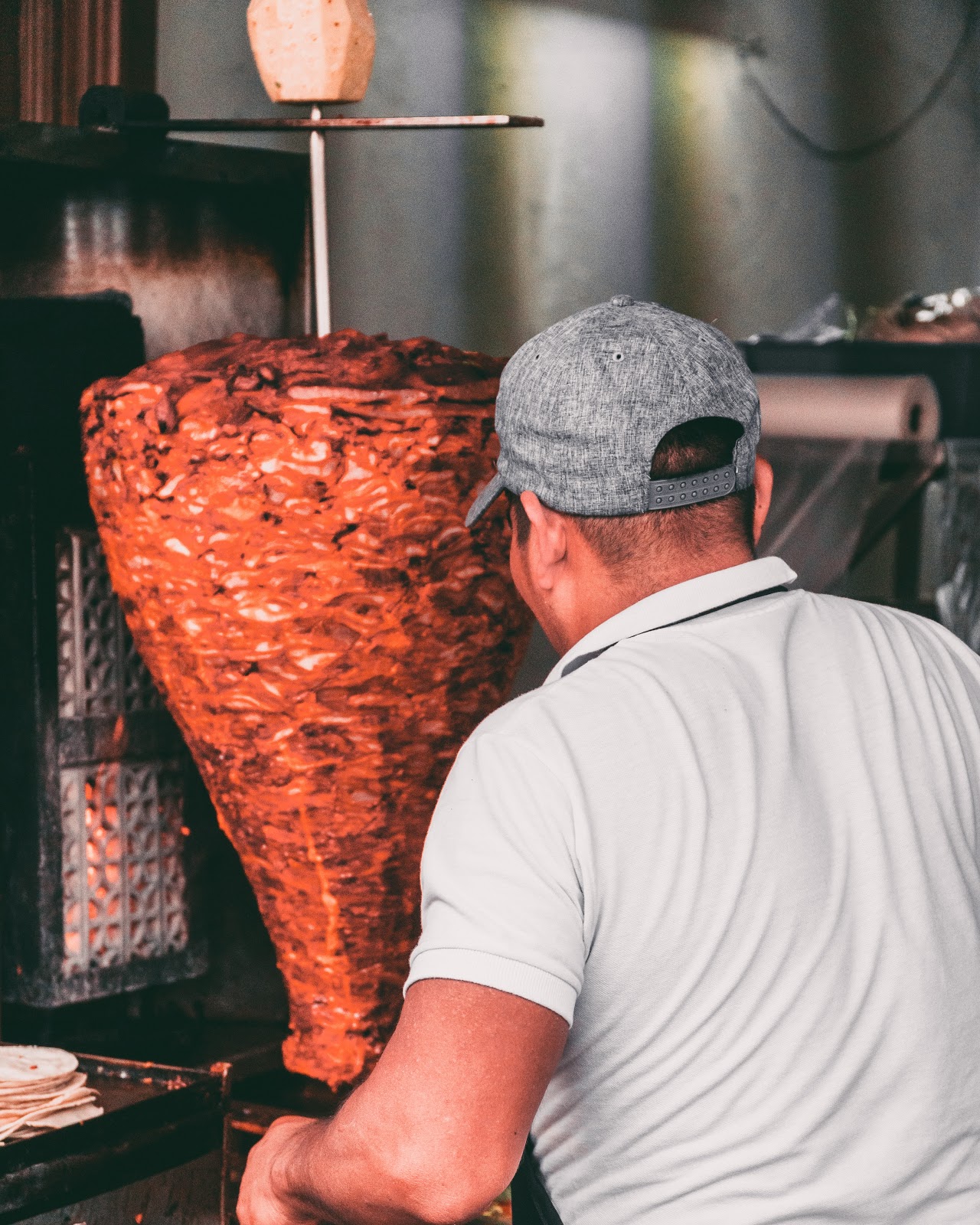 Ask five people from Mexico City to tell you the best taqueria in the city and you will get five different answers. Everyone has their favorite, the absolute must-visit, best taco that you really can’t live without for any longer than it will take to get there right this second. My personal favorite is a cart with no sign, on the corner of two streets I’ve forgotten the names of, which is frankly less than useless. My second favorite, however, is far easier to locate.

Tacos Orinoco is on the corner of two of Mexico City’s most recognisable streets, Insurgentes and Alvaro Obregon, in the heart of the beautiful, achingly hip district of Roma. It has an eye-catchingly retro look to it, from the blocky, illuminated vinyl signage out front to the clean, white-tiled interior complete with red formica tables. The tacos are huge, both in size and in flavor. This is norteňo cooking at its finest, carne asada straight from the grills of Monterrey in Nuevo Leon.

Orinoco is not flashy, showy, or elegant. Eat here and you will come away with greasy fingers, a face full of salsa, and avocado down your shirtfront. But this is the best part of eating in Mexico City. It is a tactile, sensory experience full of joy, and completely lacking in propriety or inhibitions. Only in Mexico City would deep fried pork skins be considered a completely normal extra to add to a slow-roasted pork taco already enveloped in melted cheese and topped with roast potatoes. Come hungry and you won’t leave disappointed.

As the center of a surprisingly large and extraordinarily diverse country, Mexico City itself doesn’t really have much in the way of a traditional cuisine per se. What it does brilliantly is take little snippets of the best everywhere else has to offer, and serve up a mix that is uniquely Chilango.

In fact, some of the best Mexican food in general borrows heavily from other cuisines. Tacos al pastor are essentially Lebanese kebabs bathed in axiote paste. Queso relleno from the Yucatan stuffs minced pork into Edam cheese, apparently thanks to Dutch pirates who operated there in the 18th century. The pasties from Hidalgo came over with Cornish tin miners when Mexican mines were mostly owned by the Brits.

So it is perhaps unsurprising that my favorite restaurant in Mexico City is from the Yucatan Peninsula, the other side of the country, over a thousand miles away. Yucatecan cuisine is possibly the best food in Mexico. Steeped in Mayan culture, history, and ancient techniques, Yucatecan cooking has been recognised by UNESCO as an aspect of Intangible Cultural Heritage, and every dish bursts with flavor. 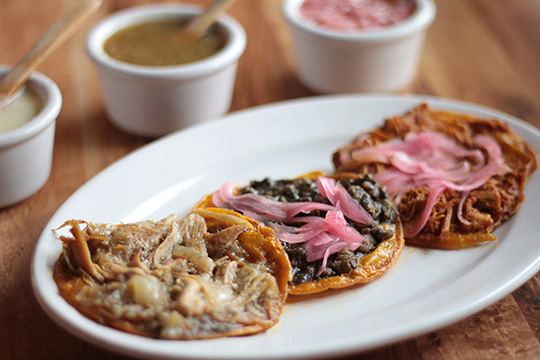 Fonda 99.99 is a classic Yucatecan fonda. Tucked away in residential Del Valle, far from the major tourist haunts or fancier neighborhoods, it is a lunchtime-only affair, closing for business at about 7pm. Its modest front masks its immense popularity. It is a first-come, first-served kind of a place, and anyone arriving after 1pm will likely be looking at at least a half an hour wait. But don’t be put off by the line, as the joint serves up the most exquisite, flavorful meals you’ll find in the whole city. The cochinita pibil, pork dowsed in axiote and bitter orange, wrapped in banana leaves, and cooked long and slow in a buried fire pit, is out of this world. The sopa de lima brings a dash of citric sharpness, while the fish tacos, from octopus to cazon, are the perfect light addition to the heavier meat mains. Service is brisk but perfect, a waiting staff of effortlessly poised older folks in crisp white uniforms who have clearly been doing this since the place opened. There’s almost nothing that could be improved here, and if you are anything like me you’ll find yourself coming back here again and again, to properly delve into the delights of the extensive menu.

But to really, truly eat like a local in Mexico City you have to step beyond the doors of restaurants, fondas, and even taquerias, and take a leap of faith into the genuine street food of the city. The steaming baskets of tacos de canasta, or the intriguing tin barrels of tamales, cycled around to the sound of a jaunty prerecorded message.

And so we end up back at the salsa that first blew my mouth and my mind.

The center of Mexico City is a chaotic place. Life orbits the Zocalo, the main square, and the streets, alleyways, and tiny cut-throughs are heaving with people and hard to navigate. Stalls and shops change daily, making landmarks hard to pinpoint, and resulting in a gloriously loud, vibrant, shifting nexus that epitomizes the city perfectly.

Hidden away in the midst of this magnificent chaos, on the corner of Venustiano Carranza and Pasaje Yucatan, is a stall serving that most decadent of creations, the deep-fried quesadilla. Nothing but three or four trestle tables surrounding vats of boiling oil and plastic tubs of salsas, its unassuming appearance masks one of the most extraordinarily more-ish food experiences I’ve ever come across. Each bite overflows with a rich volcanic flow of melted cheese, followed up with a hit of delicious meat, mushrooms, or refried beans. There’s not a lot of nuance here, it’s just simple, intensely pleasurable fare where the mess is part of the fun. The aforementioned salsas are exceptional, but tread carefully, as they will leave you broken and burnt if you don’t take it slow.

Mexico City’s non-stop, exuberant, incredibly welcoming personality is perfectly reflected in its cuisine. Eating like a local involves a willingness to look beyond first impressions and try something new, and rewards anyone happy to get their hands a little messy!